I hope you are all well! I was just about to write about my book news when I realised that I have loads of thoughts rushing through my head. Quite frankly the news you hear coming from London at the moment isn’t positive. The city feels like it has been under siege, by terrorists, politically and environmentally. My head is in a complete mess but as a writer I must persist, I must go on….

The thoughtless and shocking terrorist attacks in the country over the last three months have definitely impacted the easy-going attitude of the typical Londoner. A few months ago there was an attack in West Minster, then following this one in Manchester and the latest one was in London Bridge.

Each of these attacks has been brutal and heart wrenching. I don’t know why but the London Bridge attack felt far too close to home for me. I took a friend to the Shangri-La afternoon tea at Ting restaurant for her 40th birthday. As we looked at the city view from the 35th floor she commented that she’s been photographing the bridge with her husband. It could have been her that was involved in the attack. The thought was chilling.

The attacks upset me on various levels. Firstly, they’re senseless; cowards are targeting innocent locals or tourists. Secondly, London is a hard enough city to live in. Loads of migrants (like me) come here to work because the opportunities here are better than home. We work hard and we pay our taxes.

It’s a crazy city with so many different industries all in one place, political (Westminster), banking (Canary Wharf), television and entertainment (West End) and the list of industries goes on. So many different industries are all contained in one city. The dynamic is unusual. But that’s one of the reasons why there’s such a cross section of people living in the same place. And it’s part of London’s charm. We supposedly all get along with people from different races, backgrounds and religions. Many of us living in the city have family far away and our support networks here are thin. But you struggle on – we all do. Expats and Brits together. All of us here know that living in a big city – maybe – just maybe – big things will happen. Also, the chance of doing what you love is at the very least possible. Adding fear into the mix, just seems cruel, and so against the accepting ethos of the city.

Last week you might have heard about the political circus happening in Britain. As an Australian I’m a resident and a member of the commonwealth so I was lucky enough to have the opportunity to vote. Whichever government wins will have the power to shape my future directly and the country for decades to come. Even though the election was over one week ago, the results were so unexpected leaving the current Prime Minister in a worse position than she was in – so they’re still trying to work out what to do from there. Over the last ten years that I’ve lived here, I haven’t heard as much chatter about politics from my friends. But ever since the catastrophic Brexit referendum where the country voted to leave the European Union – politics has very much been on the agenda at many dinner parties I’ve been too. Brexit and the opportunities with Europe have been ripped away from us because the public was so poorly informed. Anyway, we will have to watch and see what happens in this space.

Environmentally – well the heat is on due to climate change. However in this usually dreary city I can’t be more thankful for the unusual heat we’ve been having here. Finally I’ve something positive to write about! Tomorrow is supposed to be a scorcher of a day. It’s supposed to be epically sunny at 28 degrees! Whoop whoop. Those of you who live in sunny cities may not fully appreciate my new found love affair with the weather. It’s very British but I completely understand it now. London is the most amazing city in the sun. Everything looks sparkly (if you can say that about a city which existed back in Roman times) and people are friendlier. Unfortunately for me, tomorrow I’m going to be stuck in doors at a writer’s workshop which I might be able to tell you about later. But I should get home to enjoy the late evening and have a barbecue in our garden. I will not get into my new found fascination with outdoor lighting (think solar lights, battery operated umbrella string lights and lanterns)…but will post a few pics instead. 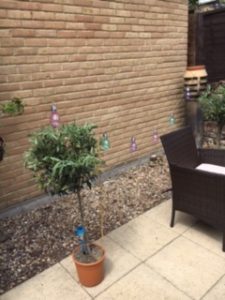 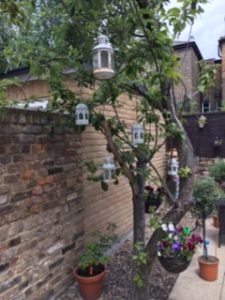 Anyway, despite all of this I’m on target with the final draft of Phoebe’s Performance which is scheduled to be completed by the end of June and it will go off to beta readers. Please feel free to contact me if you would like to be part of this team. Also, I’ve even sketched out the plot for the sequel which is exciting!

For those of you who are interested in my work with The View Magazine please sign up to my website for the story by using the following link.