This is your bonus blog on my breakfast with Gillian Anderson the mega star.

What can I say? She’s had such an amazing career as an actress in the X-Files and now The Fall. She’s also an author and when she spoke intelligently I felt a stab of envy because she wasn’t a thick Muppet like some actresses (sorry to stereotype but sometimes people simply don’t have everything). There was clearly something between her ears.  I was there to see Gillian because she was promoting her new book ‘We’.

Anyway Gillian, let’s call her Gilly, because I’m Australian and even though I’ve lived in London for most of my adult life I still can’t help shortening anything. Anyway, Gilly was this uber cool, calm and collected woman at the breakfast with Red Magazine. She managed to stay like that even though there were hoards of women pushing and shoving outside Bronte Restaurant on The Strand to take a photograph of her.  Bear in mind that the event was ticketed, so it wasn’t as if we weren’t all going to get a seat. I too was one of those people photographing away (my pictures are shocking – blurry because of my shaky hands) but Gilly wasn’t phased. She just was.

The breakfast broke down my illusions that celebrities, like Gilly, lived this rock star life, filled with filming and red carpets. Who wouldn’t want fame and glory? As a writer, that’s not something I’m ever going to really have to worry about but I thought actresses would be living the dream.

As she described the book, ‘We’, co-written with journalist Jennifer Nadel, I began to sense an underlying sadness of what her life might entail. 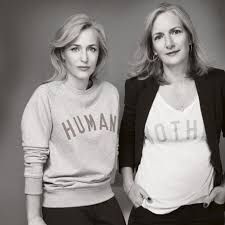 I might be completely off the mark but from Gillian’s examples, I seemed to understand that even celebrities suffer too from issues like loneliness, heart break, injustice and the daily grind.

I couldn’t help but reflect on my own frivolous issues like: What was I going to wear to my friends wedding since I’d put on four kilos in four months? How was I going to impress my mum when she was visiting from Australia? What did my neighbours this morning when I walked around in my underpants and no bra, but accidentally left the blinds open?

Anyway, there have been times in my life when sh!t has gotten more real. But at the time of seeing Gilly, I didn’t really want to dwell on negativity. But I thought her book would have some useful tools anyway, for when things did. Gilly and Jennifer discussed how the book promoted self change, how to find inner peace and happiness by following 9 key principles: honesty, acceptance, courage, trust, humility, peace, love, joy and kindness. 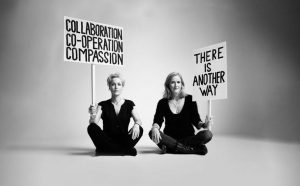 All of those key principles felt like something I could read about. And hell, it’s good to learn something and if I bought a hardcopy book I’d also get a chance to have a one-to-one chat with a famous person. So I’ve got my copy of ‘We’ which is sitting nicely under my bed (along with other chick lit novels I’m reading for the book club). But I’ll give it a whirl. But after this brush with fame I couldn’t help thinking that maybe fame and fortune isn’t all what it’s cracked up to be, unless you laugh along the way.

So…even though sometimes people don’t respect romance authors, writing comedy is something I absolutely find uplifting and it’s a profession I love. I hope you’re all doing something you love.

Power to you people.